Let's call out the lies on climate. Like Adani is a done deal, 26% by 2030 is adequate, and climate action will cost too much. 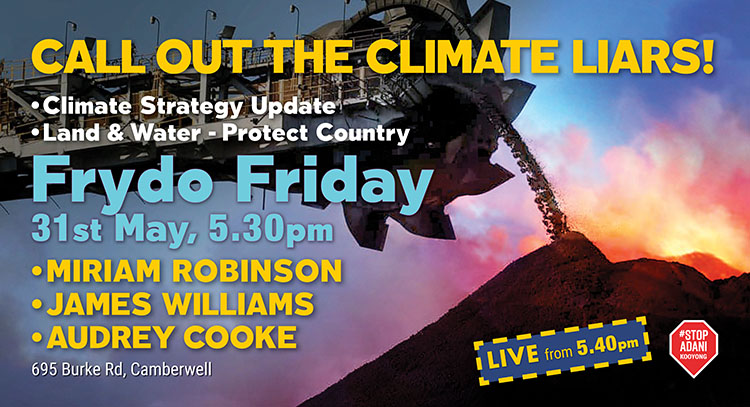 So now we have to stare down more years of destructive policies on climate and the climate movement is being blamed. Adani is promising an immediate mine start up under the threat of another deluge of misinformation, massive electoral spending, and Trump style voter suppression and fake news.

Are we going to lie down and say it's all over? No way.
Let's take our anger and our love for our kids and ramp it up!

Join us for a very significant event at Josh Frydenberg's office featuring:
• Miriam Robinson - Grey Power, update, strategy and inspiritation
• James Williams - on protecting Country
• Audrey Cooke - Live host
This is an event to sort truth from lies and find out about how we can join with the vast majority of Australians who want to protect our climate from the awful threat of Galilee coal (or gas for that matter).

And it's time to support W&J as their landmark case against the bussed in, paid for fake ILUA rumbles on. Indigenous folks have been at the forefront against fossil extraction, and they stand to lose their entire culture as the Adani mine will massively damage the aquifer that feeds their sacred Doongmabulla Springs, the home of the Rainbow Serpent, the origin of Time itself.

Bring your best No Means No or StopAdani T's, creative placards, emergency ring tones, your love and your rage and let's work now to protect land and water and call out our politicians for the climate liars they are.

Starting at 5.30pm so more people can come after work.